Places to  visit in the Province of  Fermo:

The coast is a succession of long golden beaches interposed by shadowing pinewoods. The sea is beautiful with shallow water where you can splash around and with sandy beaches where you can relax and sunbathe.

From Civitanova Marche, through Lido di Fermo to Porto San Giorgio, you can find shores with pebbles and sandy beaches.

There is no other region in Italy where the sea is so close to towns and villages very rich in Art and History and a step away from the gentle rolling hills of the hinterland.

Pageants and Festivals in the Fermo territory 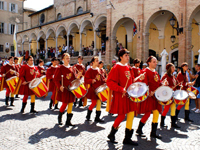 The “Palio or Cavalcata dell’Assunta” is a very ancient, folkloristic and religious event celebrated every year. It dates back to 998 A.C. when, on the 15 th of August, there used to be a horse race to honour The Holy Virgin Mary that is the Patron Saint of Fermo. The most ancient town districts that are Pila, San Bartolomeo, Campolege, Castello, San Martino, Fiorenza and the most recent ones such as Capodarco, Torre di Palme, Campiglione e Molini Girola, take part to the horse race. 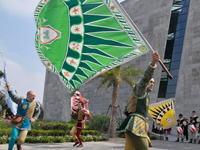 The legend has it that, during the late Middle Ages, in Sant’Elpidio a Mare there was scanty water. So, to avoid the daily hubbub of the women at the well located in the main square, it was held a game where the four town districts (San Giovanni, Sant’Elpidio, Santa Maria e San Martino) had to take part with a team of 6 players.The winner team could get the water from the well first. It has been celebrating, every year on the second Sunday of August, since 1953. 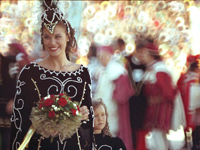 On the second Saturday of July and on the first Sunday of August, the city of Ascoli Piceno goes back to its glorious past (6 centuries ago) to celebrate the grandeur and opulence of the free municipality and its Patron Saint Emidio. If you visit Ascoli during these days it is like having a marvellous dream. It has been celebrating since1955 so that now Ascoli Piceno is appreciated and renowned all over Italy. 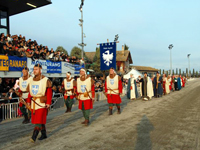 “I Giorni di Azzolino” is a commemoration celebrating Azzo VII, Marchese d’Este, Prince of Ferrara, from which derives the current name of “ Grottazzolina “. During these days Grottazzolina goes back to its Medieval period through a parade with traditional clothes, popular games, archery and horse tournaments, ancient craftmanship workshops and Medieval dinners. Many local people and tourists go to Grottazzolina to enjoy this Festival. 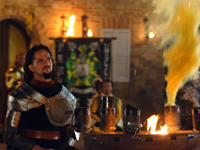 In 1450 the Abbot of Farfa gave the “Piana di San Gualtiero”( Saint Gualtiero Plain) to the Community of Servigliano. To celebrate the event, some games were organized. From 1969, during the third week-end of August, each year, it is held the so-called “Torneo Cavalleresco” di “Castel Clementino” which is a parade with traditional costumes of the XV- century. There are over 300 people wearing the traditional clothes made by local tailors with absolute accuracy, thanks to their ability and to the help of paintings by famous artists such as Crivelli, Ghirlandaio.

La Perla is also the start point for those who like go shopping to the best fashion and footwear outlets. In fact it is located 10 minutes drive from the best outlets such as “Il Castagno”, TOD’s, Prada, Nero Giardini, Geox, Loriblu, Cesare Paciotti, Janet&Janet and from the best shoes factories for women, men and kids.

It will be an exiciting, fascinating and enjoyable journey if you go to the hinterland, where there are many good and typical restaurants, to taste local specialties such as “salami”, ham, cheese, wine, honey, typical egg pasta, lamb,mushrooms, truffles and marmelades.

According to the hosts’ suggestion, you can visit workshops and retail outlets where you can buy the traditional, good tasting and healthy produce of our territory.

Places to visit and discover in Le Marche region

Le Marche region and the territory of Fermo are rich in enchanting landscapes, culture, art, local museums and traditions. Every aspect of this area let you follow the rhythms of tradition and of good living.

In Le Marche region there is the highest density of museums and civic galleries of Italy: 246 out of 246 municipalities and 315 libraries collecting over 4 millions books.